Poetry and Poems By The Author Clive Atkins 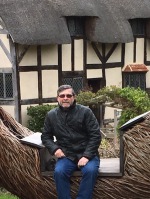 Clive Atkins was born in 1953 in High Wycombe, Buckinghamshire. Like a lot of people in High Wycombe his family worked in the chair making industry, his father being a chair maker. He had a happy childhood and lived with his parents and younger brother in a council house in the Micklefield District.

His early school days were difficult as he found watching the magpies in the woods from the classroom window more preferable than studying his reading. Football and cricket were also great passions, which have continued to this day. In his senior school days at Hatters Lane School and later at Wycombe College, Clive flourished and had a number of poems published in school magazines.

Clive progressed in a business career and has done well, but his great love other than sport has been the written and spoken word. He has written song lyrics and likes provocative subject matter. His lyric writing has developed into poetry and he has had competition successes and numerous works published in anthologies and magazines.

Clive likes to write about life situations and how they effect people. He likes to explore relationships, love, growing up, social injustices, environmental issues, but also has a sence of humour, which comes through in a number of his poems.

His influences are drawn from various modern forms, but music has been a major force, The Kinks, The Jam, Sting and Billy Bragg. His humour is influenced by Spike Milligan and John Cleese. Sir John Betjeman, Roger McGough and Pam Ayres are poets he enjoys reading. Clive tries to avoid influences wherever possible to maintain spontaneity and originality. He is a member of The Poetry Society.

Clive has recently published his songs September Bride and Perhaps we'll Meet Again performed by Plastic Wizzard on cdbaby. It can be found on Amazon or iTunes. If you're interested in music check out cdbaby or iTunes and you will see a selection of songs written by Clive, some of the lyrics started life as poems.﻿ The latest song written by Clive for Plastic Wizzard is called Midnight Movie. The video is now available on You Tube https://www.youtube.com/watch?v=Yvql9iouSkU

Words and Music by Clive Atkins